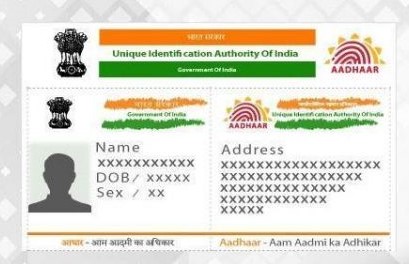 What is Aadhaar
Aadhaar number is a 12-digit random number issued by the UIDAI (“Authority”) to the residents of India after satisfying the verification process laid down by the Authority. Any individual, irrespective of age and gender, who is a resident of India, may voluntarily enroll to obtain an Aadhaar number. A person willing to enroll has to provide minimal demographic and biometric information during the enrolment process which is totally free of cost. An individual needs to enroll for Aadhaar only once and after de-duplication, only one Aadhaar shall be generated, as the uniqueness is achieved through the process of demographic and biometric de-duplication.

Ten Fingerprints, Two Iris Scans, and Facial Photograph
Aadhaar number is verifiable in an online, cost-effective way. It is unique and robust enough to eliminate duplicates and fake identities and may be used as a basis/primary identifier to roll out several Government welfare schemes and programmes for effective service delivery thereby promoting transparency and good governance. This is the only program of its kind globally, wherein a state-of-the-art digital and online Id is being provided free of cost at such a large scale to people, and has the potential to change the way service delivery functions in the country.

Aadhaar is a strategic policy tool for social and financial inclusion, public sector delivery reforms, managing fiscal budgets, increasing convenience, and promote hassle-free people-centric governance. Aadhaar can be used as a permanent Financial Address and facilitates financial inclusion of the underprivileged and weaker sections of the society and is, therefore, a tool of distributive justice and equality. The Aadhaar identity platform is one of the key pillars of ‘Digital India’, wherein every resident of the country is provided with a unique identity. The Aadhaar program has already achieved several milestones and is by far the largest biometrics-based identification system in the world.

Aadhaar identity platform with its inherent features of Uniqueness, Authentication, Financial Address, and e-KYC, enables the Government of India to directly reach residents of the country in delivery of various subsidies, benefits and services by using the resident’s Aadhaar number only.

Non-Resident Indians (NRI’s) and Overseas Citizens of India (OCI’s) on the question of linking Aadhaar details with Bank Accounts/PAN Cards and or for getting Mobile/Gas connections etc. The government of India once again clarifies:

“As per Section 139AA of the Income-tax Act, 1961, every person who is eligible to obtain Aadhaar number shall, on or after the 1st day of July 2017, quote Aadhaar number— (i) in the application form for allotment of permanent account number; (ii) in the return of income. The above provisions apply to persons who are eligible to get Aadhaar. Under section 3 of the Aadhaar Act, 2016, only a resident is entitled to get Aadhaar. Therefore, the provisions of Section 139AA quoted above regarding linking of Aadhaar to PAN or the requirement of quoting the Aadhaar number in the return shall not apply to a non-resident, who is not eligible to get Aadhaar.”
Can an NRI apply for Aadhaar?keyboard_arrow_up

1. Can an NRI apply for Aadhaar?

YES. An NRI (whether minor or adult) with a valid Indian Passport can apply for Aadhaar from any Aadhaar Kendra.

2. Can my passport be used for the Aadhaar update of my spouse?

If your passport has the name of your spouse, then it can be used as Proof of Address for them.

3. I am an NRI and I have an Aadhaar. Can my spouse be enrolled based on my Aadhaar & passport?

1. If a spouse is NRI – a valid Indian passport of the applicant is mandatory as Proof of Identity (PoI).
2. If your spouse is an Indian resident (not NRI) – any valid Proof of Relationship document (refer: https://uidai.gov.in/images/commdoc/valid_documents_list.pdf) including your Passport (having the name of your spouse) can be used for enrolment under Head of Family (HoF).

4. What is the process for Aadhaar enrolment for children of NRIs?
Pls refer to the below:

The child is below 5 years of age:

One of the parents/guardians has to give consent for the enrolment of the minor by signing the enrolment form.
If the minor is an NRI – a valid Indian passport of the child is mandatory as Proof of Identity (PoI)
If the minor is an Indian resident (not NRI) –
No document in the name of the minor: any valid Proof of Relationship document (refer: https://uidai.gov.in/images/commdoc/valid_documents_list.pdf) such as Birth certificate can be used for enrolment under Head of Family.
Minor has a document: use a valid Proof of Identity (PoI) and Proof of Address (PoA) document (like a School ID card) in the child’s name for enrolment (refer: https://uidai.gov.in/images/commdoc/valid_documents_list.pdf).

5. Can I give an International mobile number in my Aadhaar details?keyboard_arrow_up

Currently, we do not support international/ non-Indian mobile numbers.

6. The address on my passport is not updated. I want to give my present address for my Aadhaar application. Is that possible?keyboard_arrow_up
YES. A valid Indian Passport is mandatory as a Proof of Identity (PoI) for NRI applicants. You may choose to give any other Indian Address with a valid supporting Proof of Address (PoA) as per the list of documents acceptable by UIDAI: https://uidai.gov.in/images/commdoc/valid_documents_list.pdf

7. What is the process for NRI enrolment?keyboard_arrow_up
The process is:

Visit any Aadhaar Kendra of your convenience.
Carry a valid Indian Passport with you
Fill in details in the enrolment form
Giving Email ID is mandatory for NRI
The declaration for NRI enrolment is slightly different. Read and sign the same in your enrolment form
Ask the operator to enroll you as NRI
Give your Passport as Proof of Identity
You may choose to use your Passport itself as Proof of Address and Date of Birth proof or give some other valid document/s for this (As per https://uidai.gov.in/images/commdoc/valid_documents_list.pdf)
Complete the biometric capture process
Check all details on screen (in English and local language) before you allow the operator to submit
Collect the acknowledgment slip/ enrolment slip that has your 14-digit Enrolment ID and Date & Time Stamp. You can check the status of your Aadhaar from: https://resident.uidai.gov.in/check-aadhaar

Want to join the discussion?
Feel free to contribute!

CDC to all domestic travelers: Test close as possible to departure time

Hey, Do you Renunciated your Indian citizenship?
Scroll to top